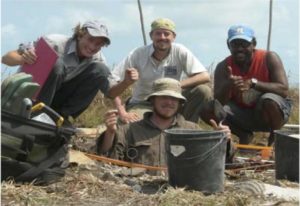 In 2004 Matthew completed a Master Of Multimedia at Monash University, and in November 2006 joined archaeologist Duncan Wright on an archaeological expedition to the Torres Strait. By reading about the archaeology of this region, Matthew recognised the need for interpreting Australia’s archaeological record in the context of ancient geography, and was inspired to apply multimedia methodologies to present this archaeological knowledge.

Matthew created an interactive visualisation named Sahul Time, which combines sea-level curves over the past 100,000 years with reconstructions of ancient geography, time-sensitive icons, and site-based visualisations.

In 2008, Sahul Time received funding from the Environmental Futures Network, and the range of timescales was extended to encompass historical and geological timescales.

However, the fact that Sahul Time is built in Adobe Flash has made development and deployment increasingly difficult. Flash development is built around authoring ‘MovieClip’ vector animations, and Sahul Time is built out of many such animations, controlled by ActionScript programming code, and synchronised with one overall interactive timeline that can be zoomed continuously between timescales. This allowed for great flexibility and freedom of expression in building autonomous visual building-blocks to represent various spatio-temporal phenomena.

Unfortunately, Flash has now become a less-favoured technology for delivery of interactive experiences via the Web, incompatible with most mobile devices, and requiring permissions on many computers. For this reason, a new incarnation of the project was launched under the name “Temporal Earth”, with the aim of creating a web-native visualisation, drawing on the success and lessons of Sahul Time.