Home »What We Offer »Touchscreen Exhibits

Temporal Earth can be adapted to create touchscreen exhibits that interface with physical buttons and lights to highlight objects on display. 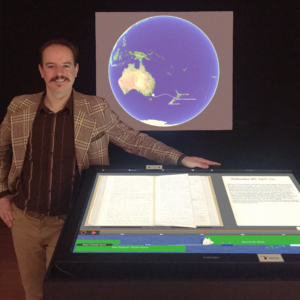 In November 2016, Canberra Museum And Gallery (CMAG) offered the exhibition Memory Of The World In Canberra, showcasing 20 UNESCO heritage-listed objects that are located in Canberra.

James Cook’s ‘Endeavour Journal’ from his 1768-1771 circumnavigation is one of these MoW objects, but was too precious to be transported from the National Library of Australia.

Instead, I was commissioned to create a touchscreen exhibit that presented a life-size representation of the journal (based on scans by the National Library), allowing visitors to interactively turn the pages of the journal by swiping across the screen. This was combined with the existing functionality in Temporal Earth, to display the corresponding progress of the voyage on a virtual globe projected onto the wall.

At the bottom of the touchscreen, a timeline presented an interpretation of the voyage through the three years, marked with significant events (e.g. coffins representing deaths of the crew), and indicating museum objects on display a nearby display-case: botanical specimens and a ball from one of the cannons thrown overboard when the Endeavour hit the Great Barrier Reef.

By default the exhibit would automatically animate the voyage over about two minutes, flipping through the journal at the same time. Labels on the touchscreen encouraged visitors to try swiping the pages or dragging the timeline, viewing James Cook’s written journal-entries, and also a more readable transcript.

Overall, the CMAG exhibit offered a good demonstration of how Temporal Earth can be adapted to create highly engaging museum exhibits that can link written documents, temporal and spatial representations, and associated museum objects.

Work has now been undertaken to interface with a microcontroller that can turn on lights to illuminate each museum object in turn when the timeline reaches the event relevant to it, producing a simple form of ‘object theatre’. Physical buttons below each museum object can also tell the display to move to a specific date and place, and perhaps display a more detailed animation of the local events related to the object.